Hankasalmi Museum Village is located on a church hill in the heart of the municipality of Hankasalmi. The Museum Village area has 12 log buildings which have been transported from various places in the Hankasalmi area. The yard is enclosed by the buildings and together they form idyllic 19th century farmyard surroundings.

The Museum Village is owned by Hankasalmi Local Heritage Society that was founded in 1954. Plans for the Museum Village were laid soon after the year of establishment. The Artefact Museum was the first building that was opened to the public in the old granary, which still stands in its original location. In 1964, the Museum Village celebrated its opening, and in 1998, all buildings had finally been transported to their places. 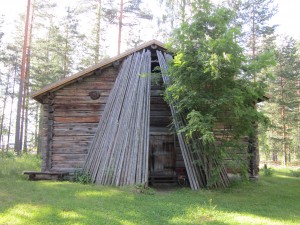 The smoke cabin dates from the end of the 18th century and it used to be the main building of the house of Ristimäki. The building was used as a smoke cabin until 1904. During its history, the building has also functioned as a school.

The smoke cabin is heated by a stove that is made of natural stones. The smoke escapes through a hatch in the ceiling and comes out from a wooden flue on the roof. Looking from the doorway, the right-hand side of the cabin belongs to men and their different kinds of utensils. The women’s side is on the left near the stove and household implements. The front door of the smoke cabin is sheltered by a porch that is made of long, wooden poles. 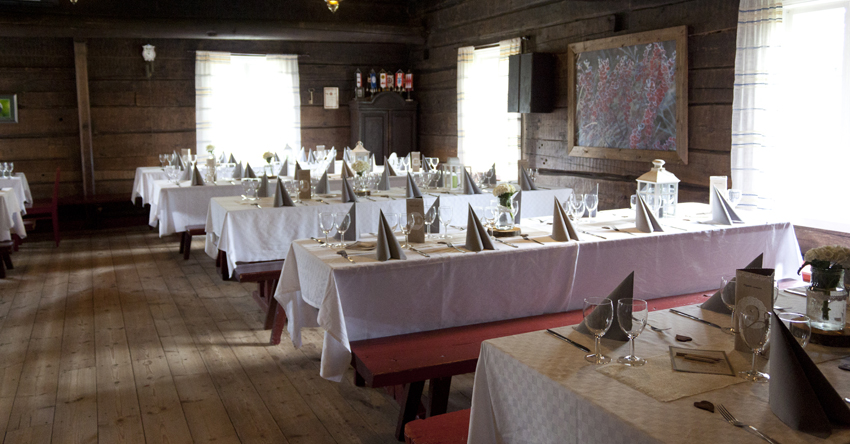 The massive semi-detached house Hallan tupa is a local heritage building, and it is used as a venue for celebrations and meetings. The building is 9 metres (30 feet) wide and 28 metres (91 feet) long. The house has two big living-rooms, and between them, a kitchen and a porch. Originally, the building had neither kitchen nor porch but in their place, between the living-rooms, there was a covered passage that could have been passed through on a horse. Later on, the passage was enclosed, and new spaces were built in it: a veranda in the front and two bed chambers at the back, where now is the kitchen. The yard surrounding Hallan tupa is an idyllic and summery venue for festive occasions.
Hallan tupa has originally been the main building of a farm called Vanha-Halla on the shore of Lake Armisvesi. Vanha-Halla is one of the oldest local family estates and it has been mentioned in Savonian peasants’ register of land ownerships already in 1561. The great log house has been built in two parts; the living-room on the church side is from the 17th century, when family Kauppinen from Venetmäki settled in Vanha-Halla. The other living-room was brought in the 18th century from Pieksämäki. One of the rafters has year 1851 carved in it. At that time, the house was extensively renovated and for example chimneys were built. 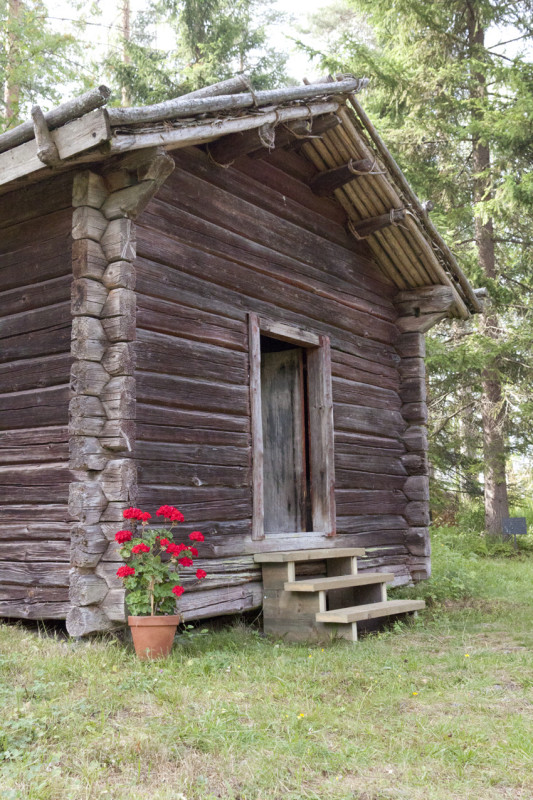 The storeroom for clothing

The storeroom for clothing is from the estate of Ritala in Venekoski and it dates from the year 1859. In this building people kept the linen of the house. In the summer, the daughter or maid of the house would sleep in the storeroom.

Smoke sauna has been brought from the estate of Kuusela in Sauvamäki, and it was built at the beginning of the 20th century. Natural stones without mortar were piled on the sauna stove. There is no chimney but the smoke escapes through a small ventilation hole. The seats are high up and one of the walls has a small window. Sauna whisk is an essential part of the sauna culture. It is made of silver birch and it is used both to wash oneself and to make the sauna heat feel more effective. In the old days, sauna was heated up several times a week but Saturday night sauna was an important event, and it is still a part of the living tradition.

Sauna has been part of many different events and household chores: bathing, washing, doing laundry, smoking ham. In addition, sauna was an important part of everyday life, children were born there, and the dead were washed for their final journey. 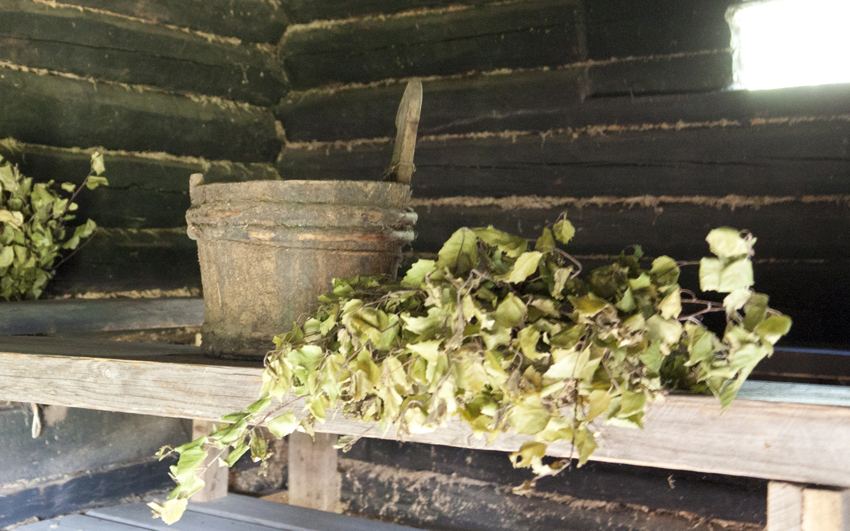 The barn of the Museum Village dates back to the 1840s and it has been brought from the house of Tiihola in the village of Halttula. The barn is not in its original shape but it has been modified and made smaller over the years. 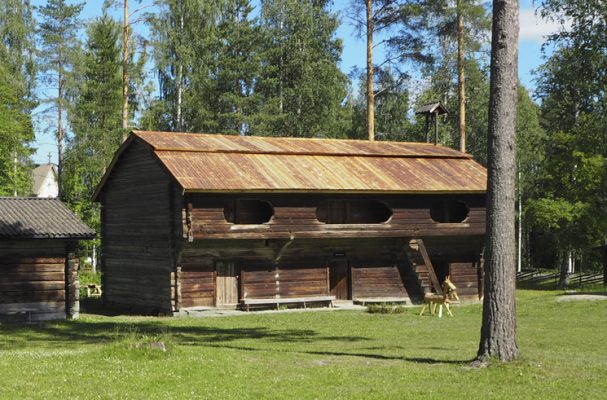 On the roof of the loft storehouse stands a grand dinner bell. The sound of the dinner bell could be heard from far away, and with it the farmer’s wife would call the workers from the fields to dinner.

In one of the rooms in the loft storehouse, there is now a display of the life of nature healer Aleksanteri Viinikainen aka Santeri of Mäyrämäki (1851–1933).

The drying barn of the Museum Village dates from the 1840s and belonged earlier to the house of Korpela in the village of Kynsivesi. The drying barn has been built for the needs of a crofter, which explains the small size of the building. The drying barn includes only a threshing room and a small additional space for threshing tools, chaff, and straw. 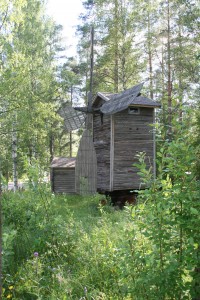 The windmill is from the estate of Lamminpää in the village of Säkinmäki. The door of the mill has year 1784 written on it, and the mill has been used for grinding grain as long as until the 1940s. The mill is a so-called “post mill”, the earliest type of European windmill.

The coal hut and the smithy, which dates from the 18th century, are both from the house of Saarikangas. The smithy had two fixed pieces of furniture: a bellows and a furnace, which used charcoal for fuel. The smithy was an important building on a farm house because all tools were self-made and repaired.

The last building that was built in the Museum Village in 1998 is the boat shelter. There are two boats from Hankasalmi in the shelter: the lower boat belongs to a municipal politician, Adam Nykänen (1820–1901), and the upper boat to Nestor Pietiläinen (1894–1987) from Venekoski. 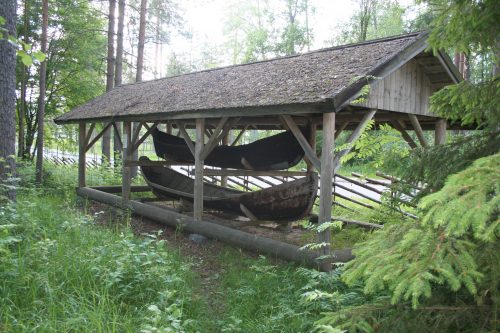 Adam Nykänen was the owner of the house of Jussila on the shore of Lake Herttu. He was an important man in the early stages of the municipality of Hankasalmi, which was established in 1872. In addition, he was chairman and cashier of the town meeting. Nykänen was one of the wealthiest men in the municipality, and he had accumulated his fortune not only from his lands but also from trade to St. Petersburg. The wooden oarlock of a boat was used as a model when designing the coat of arms of Hankasalmi.

The Artefact Museum is located in the former granary. The public granary was opened in 1879 and it held, in addition to a seed grain section, a section for grist as well, from which grain was lent to be used, for example, for baking and making porridge. The grist was also lent for cottage owners, who did not have any stock grain stored in the granary.
The public granary stopped its function in 1943. The local landowners’ association donated the building to the Local Heritage Society in 1961. The former corn bins started to fill with items that tell stories of the life in the old days. There are approximately 1,300 historical artefacts on display in the Artefact Museum: peasant and folk cultural artefacts, and items from the old church. In addition, from the local point of view the Artefact Museum has material that is part of the national history as well.

Interior of The Artefacet Museum